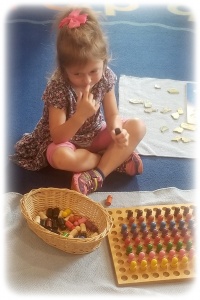 Dr. Maria Montessori was a physician, scientist and educator who developed an educational philosophy based on her scientific observations of children. Her method uses special materials that arouse a child’s spontaneous interest, producing a natural concentration on tasks which does not tire or annoy the children, but rather leaves them rested, with a feeling of inner peace, accomplishment and joy.

Dr. Montessori discovered that young children possess the unique ability to absorb information from their environment, much as they are able to “absorb” their native language without it being formally taught to them. In fact, they are innately compelled to learn, without need of external rewards. Furthermore, all children pass through sensitive periods during which they are particularly drawn to certain aspects of their environment; those times when the child’s brain is being wired for a particular type of information. Appropriate stimulation during the sensitive periods is essential to the child’s complete development. For example, children are sensitive to learning the names of objects at age two, so their environment should contain a wide variety of objects and pictures of objects. 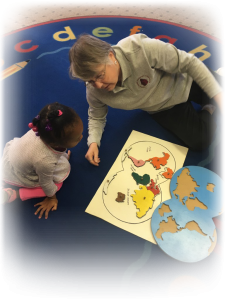 Children at Centre Square Montessori Schoolhouse & Center Square Academy are free to move about the classroom, choosing from a carefully prepared environment of multi-sensory, manipulative learning materials for:

The Montessori system of education is based on four focuses.

Montessori is 106 years old. It can be found all over the world.

There are many who hold, as I do, that the most important part of life is not the age of the university studies, but the first one, the period from birth to the age of six. For that is the time when a man’s intelligence itself, his greatest implement, is being formed. But not only his intelligence; the full totality of his psychic powers.